This web-site outlines features of the EVTAC system for assisting emergency vehicles when navigating medium to heavy traffic through controlled intersections.  Using the system could result in dramatically improved transit-times in certain situations, and there is an improvement in safety because of reduced oncoming traffic when needing to travel on the wrong side of the road.  There is always indecision at crossroads where traffic might be facing green lights, but must give way to any emergency vehicles needing to cross.

When an emergency vehicle carries a portable EVTAC transmitter, each set of traffic-lights or signals equipped with an EVTAC receiver will detect the vehicle and its direction of travel, and determine if it has entered any of the zones predefined for that intersection.  Signals are transmitted at short intervals from the vehicles whenever the sirens are activated. The traffic-signals can be configured to suit any situation – sometimes it might be better to turn all the lights “red”, rather than just setting “green” in the direction of travel. The system is only active while a vehicle is approaching an intersection, so when the vehicle passes through, the signals immediately switch back to their normal cycle.

The process used in the EVTAC system is known as Traffic Signal Preemption, and involves the prioritization of traffic flow for designated vehicles. Once an intersection has been configured, there is no requirement to connect with a central-server or the Internet -- thus each intersection should be able to function autonomously. It is envisaged that our system will integrate well into most traffic-management systems in use today. 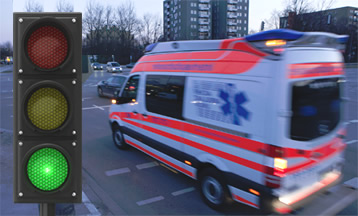 Part of the installation for the EVTAC receivers involves a simple calibration procedure that defines the zones and the associated responses.  Using an intuitive interface based on Google Maps, each intersection is defined by an octagonal marker. Attached to each marker are zones of various shapes and sizes. Double-click on any marker with zones attached, and they will display.

Shown in the calibration video is a five-way intersection with associated zones. Using the menu options and edit buttons, an operator has the ability to create and modify all details. The application is Internet-based, and any changes are recorded on a central server, and ultimately transferred to the EVTAC receiver at the intersection.

After an intersection with its various zones is configured, the simulation program provides a visual representation of how the system should respond when an emergency vehicle enters the perimeter. When the simulation is running, the vehicle-icon moves around the map controlled by mouse-clicks. The algorithm determines the appropriate response by analyzing position, orientation and speed of the vehicle. Rapid clicking at various points on the map will produce near-continuous movement.

When the vehicle approaches the markers and enters the associated detection-zones, codes display on the markers to indicate the system response. Zones are assigned a traffic-density that determines which overlapping zones have priority.